Many genetic defects are simple recessive traits, meaning it takes two bad alleles (versions of a gene) to see the condition. If an animal is tested free (for instance DDF means tested free for DD), the animal does not have one of these defective alleles. If the animal is a carrier (DDC) then that animal has one normal copy and one defective copy of the gene. If an animal is affected (DDA) then both copies of the gene are defective. Typically we would expect these affected animals to show the signs (phenotype) for that genetic condition. The only way to get affected animals is to mate a carrier bull to a carrier dam. In carrier to carrier matings, we expect 25% of the progeny to be free, 50% to be carriers and 25% to be affected.

In the case of DD, some animals have both defective copies of the gene but don’t show any sign of the genetic condition (this is called incomplete penetrance). With incomplete penetrance, some other factor is needed for the phenotype to display. This trigger may be environmental (nutritional, stress, etc.) or genetic (a second gene involved in the pathway). In the last issue of Down to the Genes, we defined the genetic conditions tracked in the American Simmental Association’s TraitTrac and walked readers through using a Punnett Square to assess the likelihood of affected or carrier progeny from carrier parents.…
Genetic Conditions ASA

How to Report an Abnormal Animal

During the calving season, it is not uncommon to hear about unusual calves born with a variety of defects. Many of these defects are spontaneous events that are triggered by a variety of cues and are not necessarily genetic in nature.
advertisement 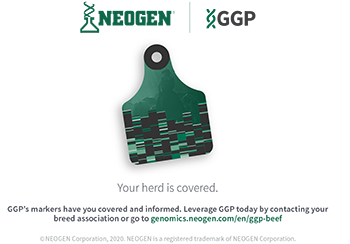 Why an Animal May Not Have GE (Genomically Enhanced) EPDs

January 29, 2021 DNA
Heading into the new year and the start of bull sale preparation, one of the DNA Department’s most frequently asked questions is why an animal doesn’t have GE (genomically-enhanced) EPDs after completing a genomic test. This article explores the general process and common reasons why GE may not appear on an animal’s record in Herdbook. The Process After an animal is tested on a genomic panel…
read article