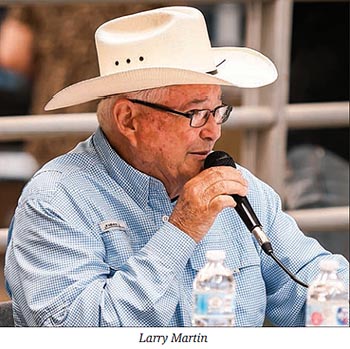 Born and raised in DeWitt County, Illinois, Larry Martin is a long-time sales manager and Simmental producer from Clinton. Growing up in an auctioneer family, Martin’s youth was spent in and out of the sale and show barns. He graduated from Illinois State University where he was a member of the Livestock Judging Team. He worked as a local vocational agriculture teacher for a short time before establishing his cattle sale business in the late 1970s.

Martin’s experiences growing up around his father’s business, Martin Auction, influenced his decision to start a cattle sale management business. The first sale that Larry Martin Cattle Sales managed was at the “Most of the Best” Show, an all-breed steer show, in Clinton. Over the years, Martin has managed and helped establish successful cattle sales in over eleven states. He has visited almost every county in Iowa and managed the sale at the Iowa Beef Expo for 18 years. Annually, he manages the national All Breeds Top 40 Club Calf Sale in Clinton. With over 40 years of experience in cattle sales, Martin has been involved in the sale of leading Simmental genetics in the cattle industry. From his own herd to other cattle operations’ popular cow families like Obsession or Burn It Up, Martin has either been a part of exhibiting, breeding, or assisting the sale of genetics that are the foundation of modern Simmental cattle today.

In addition to sales management, Martin is a founder and organizer of the annual Memorial Day Beef Show honoring Jim Flach. Established in 1988, this show has grown to the second-largest show in Illinois, with the goal of being a fun, educational experience for the whole family.

Martin has served for two terms on the Illinois Beef Association Board, and one term on the IBA Executive Board. He has also served on the DeWitt County Board, as well as many other organizations in his community over the years, and was a former president of the Illinois Auctioneers Association.

Martin credits his family for helping to make Larry Martin Cattle Sales, Martin Auction, and Martin Livestock successful. His wife, Cindy, is office manager, secretary, check writer for all consignors, and occasionally the clerk at the auction block. All three of their daughters, Lorri (Marc), Lucy (Rob), Leslie (Aaron), grandchildren, and great-grandchildren are involved in carrying on the legacy that started with Martin’s father back in 1947. 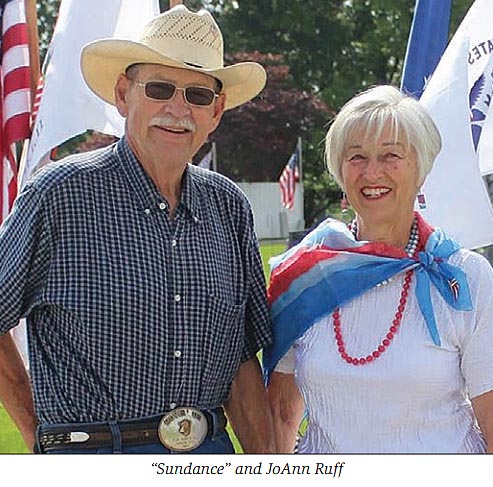 Keith “Sundance” Ruff was born and raised in the beef industry, growing up on a beef and grain farm near Long Point, Illinois. He was first introduced to the Simmental breed in 1962 when his father, Glen, purchased a three-quarter-blood Simmental bull. In 1978, Ruff purchased two Simmental heifers as a 4-H project, which became the start of Ruff Simmentals. The family soon joined the Illinois Simmental Association (ISA) and was instrumental in the formation of the Illinois Junior Simmental Association (IJSA). The IJSA members, including the Ruff family, saw a need for a national youth organization. They organized the “National Junior Simmental Heifer Show,” encouraging youth to become a part of the Simmental breed, and soon after the AJSA was formed.

Ruff has had a deep involvement with the Simmental breed over the years, and a number of successes. He partnered with Russell, Carl, and Madonna Klendworth on the bull Movin On, a son of Achilles, which became the Grand Champion Simmental bull at the 1980 American Royal Stock Show. The Ruff family had a number of successes at the National Western Stock Show, and Simmental All American Futurity, among other events. Ruff is a founder of the Simmental Breeders Sweepstakes.

In 1986, Ruff became the beef programs manager at Tri-State Breeders Cooperative in Wisconsin. During this tenure, he served on the National Association of Animal Breeders beef committee, and he continued his commitment to the Simmental breed. In the 1990s, Ruff became a field Representative for the Register. He covered a large region, attending sales and events across the country and selling advertisements for the magazine.

Ruff’s wife, JoAnn, has been an integral part of his career in the cattle business. She coordinated advertisements for the Register clientele and attended many events. In 2011, the Keith and Judy Ruff family was awarded the ISA Pioneer award.

Today, Ruff is committed to studying genetics and passionately promoting the Simmental breed. He and JoAnn own a group of Simmental bulls in partnership with family and friends. Ruff is the father of four, stepfather of two, and grandfather of fourteen.