Historical Path to Breeding Up to a Purebred Simmental Cow Herd

ASA members have evolved and adapted to meet customer and consumer needs over time. From the IGS Genetic Evaluation to the ASA’s DNA research projects, our board and membership have striven to improve cattle, making this breed a forerunner in beef cattle genetics. Part of the evolution has been the adaptation of the breed classification chart through time.

When the Association started, the initial Simmental breed-up process was designed with four categories to be as simple as possible, and the breed percentage chart reflected the end goal of making a purebred Simmental.

While the initial breeding chart was created to upgrade from one breed to purebred Simmental, the new breeding and marketing methods didn’t fit the original breed classifications. The evolution of breeding practices encouraged the expansion of the chart to include increments to match the expanding breeding methods.

In addition to the Simmental breed classification chart, the Simbrah breed had its own chart to classify Simmental percentage. The Simbrah breed-up program was completely separate from Simmental. As time went on, the two breed charts and their classifications left breeders with a mating that, if you consider the animal Simbrah, the percent Simmental was classified differently than if it was a regular Simmental cross with a different breed.

To remove confusion and eliminate discrepancies in classifications while simplifying the process for all SimGenetic producers, one percentage chart classification was chosen for Simmental, Simbrah, and SimGenetic animals. At this time, the board decided to classify both female and male purebred animals as Simmental or higher (remember that up until that time, a 7/8 bull was classified as 7/8 and a 7/8 female was classified as purebred Simmental).

As seen through time, the evolution of the breed classification has been a strategic move to simplify marketing for SimGenetic cattle. Through the changes in breed classifications over time, the genetic evaluation has continued to calculate breed percentage down to the thirty-second, based on all known ancestors to account for hybrid vigor. 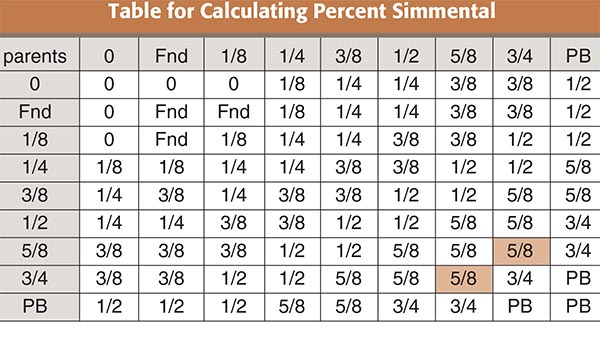 With the current breed percentage chart, SimGenetic producers have the best marketing tool available for classification, backed by a genetic evaluation system that looks behind the classification to evaluate cattle. It’s through the ingenuity of the board, members, and staff that a complicated issue of breed classification has been refined to simplify the selection of animals based on economic traits and other qualities to create easily marketable SimGenetics.