Why use EPD and Indices to Make Decisions for Bull Sales?

by Chad Russell, master of science student with Dr. Spangler at the University of Nebraska–Lincoln     |

Until the development of expected progeny differences (EPD), most purchasing decisions of bulls were based on phenotypic measurements and features as an estimate to how that bull’s calves would perform. Phenotypes (P) are the combination of genetics (G) and environment (E); (P = G + E). There are components of genetics that aren’t heritable, such as the unique combination of genes that results in hybrid vigor, or inbreeding suppression. These gene combinations will influence an animal’s own phenotype, but won’t be passed down to their offspring. EPD estimates only the heritable genetic component of that animal. So why would you want to make a purchase decision just on the genetic merit?

For an example, let’s look at the relationship between an animal’s own birth weight and the portion of that phenotype related to their genetic merit for birth weight. If you were to take two bulls whose EPD for birth weight were -1.0 and -4.0 lbs. and you breed your herd to both of these bulls, in a hypothetical situation where the calves have the same environment, the equation P = G. As a result, the second bull’s calves would on average be 3 lbs. lighter at birth, all other factors equal, which may reduce the number of problematic births caused by dystocia.

But that single birth weight you see in the catalog for that bull is influenced by his environment and his unique gene combinations, which aren’t heritable. Was he treated differently than other bulls, or weighed later or as soon as he hit the ground? EPD predictions use his own birth weight record as well as records from his half-sibs, parents, and any relevant genetic information — such as breed, birth year, comparisons to contemporaries, genomics, and pedigree — to better estimate his true potential and prevent over-or underestimation based off of just his own birth weight record.

Similarly, we are able to improve the accuracy of the estimate of his potential by using records from his progeny. However, it takes time for his calves to hit the ground, and a risk is being taken by using him for breeding when the accuracy is lower. Enter genomic testing. By identifying markers in his DNA that play major parts in his performance, we can incorporate information that is equivalent to already having~20 calves on the ground. This provides an increase in accuracy that may alleviate some risk from breeding a bull to your cows and not getting what you want.

Adding a DNA test to your decision is like knowing . . .

■ 8 ribeye measurements All this from a test you can complete before you wean the calf. 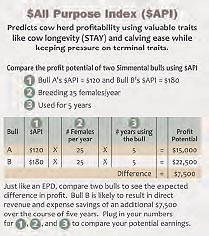 These influences on phenotypes hold true for all heritable traits, which leaves a lot to consider when buying a bull. In order to make it simpler, we have indices such as the All Purpose Index ($API) and Terminal Index ($TI) that take into account many EPD and combine them in one value expressed in dollars of profitability predictions among bulls. These indices estimate profitability when a percentage of daughters remain in the herd as replacements and other calves are terminal ($API), or a strictly terminal system ($TI), depending on what your operation needs to meet its goals. This bull sale season, study the numbers to ensure you select the heritable portion of what you see and pay attention to economic indexes to select for profitability of future genetics. 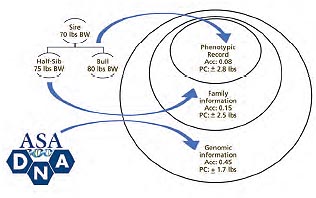 As more information is known on an animal, the accuracy of the EPD increases. Information includes an animal’s own records; family information, such as parents and siblings and their records; genomics; and eventually progeny. Genomic information for BW adds an equivalent of 22 progeny records. For example, if a bull had a BW EPD of 2.0 lbs. and an accuracy (Acc) value of 0.15., the associated possible change (PC) is ± 2.5 lbs. Therefore, we would expect his “true” BW EPD to be between –0.5 and 4.5 lbs. (2.0 ± 2.5) 68% of the time. If genomics are added, the accuracy might increase to 0.45 and the possible change will drop to 1.7, leaving a range for his “true” BW EPD between 0.3 and 3.7.